Sorry for the delay, between recovering from Fest and going back to work some insane shifts I had to catch up on sleep. Which gets me right back into my Fest diary:

So this is Sunday, which means there is not only a long regular Fest day ahead of me, but its also the day of the Fest-after party at the Holiday Inn. This is scheduled from 12:30am till 5 a.m.- so I have a loooong fucking day to look forward to. Guess I better fill up on sleep for this, right? My body thinks differently and I wake up after a bare 3.5 hours of sleep. Honestly I have no idea what is wrong with me. Its not even that I wake up and are still more asleep than awake. No. I’m genuinely awake. FML. But what can I do other than power through? So again I edit some photos, get breakfast, talk to the other guys.
Around noon we head to the Holiday Inn to meet with Kendra and set up the photo booth for the night. Again, this goes great. We have our old spot and get a lot of stuff done in an hour or two. One of the things you have to do as a photographer is to be a problem solver. Turning duct tape into string to hang up the banner is one of these things. Build a fort out of tables to channel the movement of the people is another. We also decide to move the backdrop a few feet forward, which might not have been the best decision, but more about that later. After we’re done Robert and me head back to the hotel cause Robert forgot something. We get food along the way and then head out for the first show of the day.
There are a lot of “mystery sets” scheduled for the afternoon. Although they have been announced for a few days now, its still nice to have some sets you did not look forward to weeks ahead. Pretty much all I want to see that night is at Durty Nellys, so getting in and out is a little bit of an issue as the bands are popular and the space is small. But I have to say Nellys has the best security, very relaxed and they are not putting another wristband onto me. Thanks for that. The guy at the door was very nice to us all day. 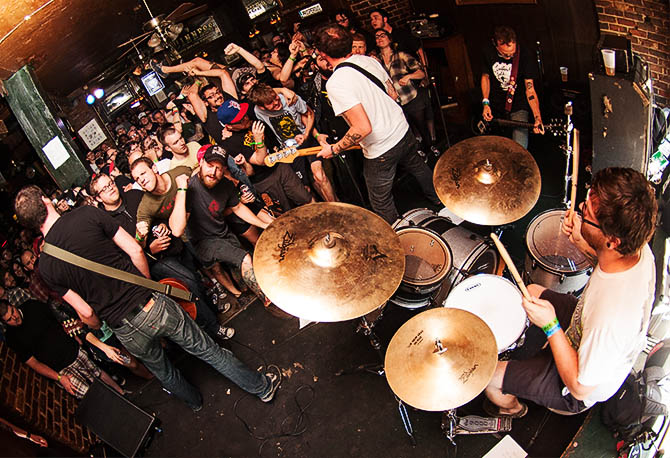 So, who is playing? Of course its the Dopamines! Again? Yes. Again. If you haven’t noticed yet, I am an idiot, so I go see the Dopadudes all the time. This small place should suit them I would say. They picked out a few of unusual songs to play, guess thats the charm of the mystery sets after all. Good start for the day. After that I make my first (any only) visit to the Florida Theater (the biggest venue) to see Night Birds – only to learn that they cancelled. Bummer. So back to Nellys it is for another show of Crusades. Then I head over to Loosey’s, where the European showcase is happening. I feel like I know even more people in here than elsewhere. We end up taking a photo and theres people from Italy, Spain, Canada, USA, France, Germany in it. Fest is really an international meeting. I get to see a bit of Leagues Apart from the UK.
The next mystery set in Off With Their Heads. Do I have seen them twice already, just at Fest alone? Yup. But at one moment I think that I actually feel comfortable at a festival where OWTH and the Dopamines are playing each day. So the band has decided to play their first album “From the bottom” entirely. For the first (and possible last) time ever. That draws a crowd, and so Durty Nellys is filling up to capacity again. Its fun, and the usual sing-alongs are there just as always. OWTH are a band that you cannot go wrong with at Fest. A take a short break after their set, get some food, just hand out on the streets.

Just for a few songs I jump into the New Top Spot to see Mixtapes. I get there in time to see somebody throw a condom at Ryan, to hear them play the song I’d like to hear. Also Jon Lewis takes a bunch of images of myself. Mixtapes have really a good crowd for them as well. They are pretty popular among the Fest visitors.
What followed was nothing but the absolute highlight of my Fest weekend. One of the most anticipated bands, not only for me, but for quite a number of people. I’m talking about Masked Intruder. They released their debut album just this year, its a great piece of pop punk and they got quite a bit of buzz going on for them as well. Nellys is packed and so I have to fight my way through the crowd. As I get there I see Mikey Erg standing on stage. I joke with him “So it was you all along, huh?” – And he answers “I’m only standing here so people see that its not me!” (if you have no idea what I’m talking about, read this link.) Nothing is really set up yet, the crowd (and the stage manager) are waiting for the band to appear. When they finally show up, they are already wearing their masks. Well, obviously they are dedicated to not break their characters.
The show starts with the drums that lead into “Stick em up”, one of their signature and fastest songs. I think “oh shit”, and that’s pretty much whats on my mind for the rest of the set. The crowd just goes wild. Masked Intruder play a fucking brilliant set, they manage to be super poppy and melodic and tight at the same time. And they pull it off perfectly. Everybody is singing along. Everybody. Each word. People are crowdsurfing like crazy. Its getting really hot inside of Nellys. My lenses keep fogging up cause its all so warm and moist. I’ve been in here for some time, so lenses should actually not do this. But… there is little I can do.
Without a doubt, their hit single is “Heart-Shaped-Guitar”, which features Maura Weaver from Mixtapes on the girl vocal parts. She is here, but she has to be crowd-surfed by the audience to get forward to the stage. Thats how packed the venue is. After putting on a mask they start the song. This is actually the first time she sings this live with the band! Everybody goes apeshit. Highlight of the Fest. Best set of the Fest. Pure fun! The “Police Officer” on stage that has an eye on the “Criminals” starts to undress.. After the set I stumble out on the street, my t-shirt is completely soaked. I start to feel cold cause I am so wet. I had to buy a shirt just to change into something dry. Here’s a video of “Heart Shaped Guitar”, see for yourself:

There are three bands playing afterwards that I would like to watch, but thats impossible. Since I am already at Nelly’s I decide to just stay and watch The Slow Death. And they are great. For some reason they have not one, not two, but three bass players consecutively. But why not? They also have a barfing drummer. And fun. At the beginning I thought about trying to just watch half the set to might catch one of the other bands, but I enjoy this too much to leave.

After that I call it quits. I need to save some energy for the rest of the night and the aftershow. Plus I want to go back to the hotel and finish the preparations for the booth. Kendra and Robert want to see Propagandhi, I don’t really care and volunteer to be the guy to do this. Before that I hang around some more. Eat. Talk to some people, buy Old Man Markley merch for a friend. Then meet up with Kendra to get her camera (mine has a broken USB port and cannot be used tethered to the computer) and then walk down to the Holiday Inn.
The party is scheduled to start at 12:30a.m., I get there by around 11p.m. expecting to find somebody there setting up. But there is nobody there. I try to ask around, contact Tony as well, but there is nobody. Even when security shows up they are not letting me in initially. When they finally do, I am literally the only person there. Like 30 minutes before this is supposed to start?! This was different last year. In the end it takes a lot longer for everyone to get there and get the party started. I could have come an hour or even 90 minutes later without missing anything. But then Tony makes a big speech to the waiting crowd (that showed up eventually) and it starts.
Just like on Friday, the booth is busy, there are a few more pauses, but overall we are doing well again. At the other end of the room the bands start to play. Again its all cover sets. Green Day, Weezer, Foo Fighters, Fugazi (not really), Nirvana. All played by Fest bands, again some sort of mystery set. But: I didn’t really enjoy these this time. What puts me off are the vocals mainly. I think most sound terrible. Kendra said it might just be because often somebody from the audience is singing. Plus BTMI are not really doing Fugazi, they do a Fugazi/Sugar Ray mesh-up. Dafuq?! 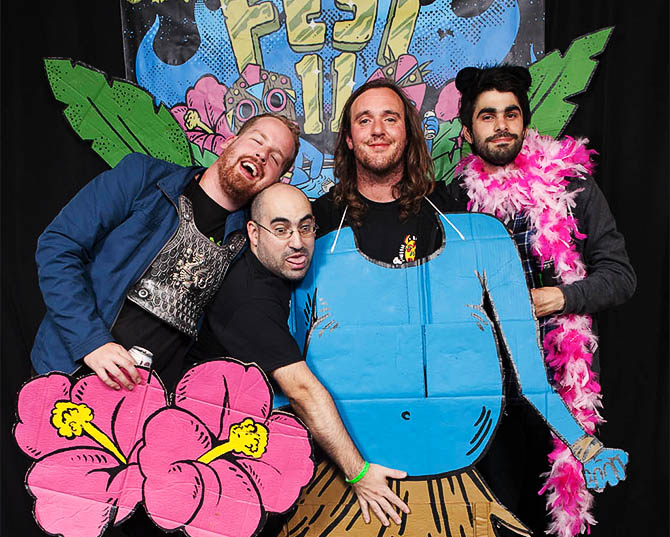 People are drunk and enthusiastic, so at some point somebody steps into the backdrop and knocks everything over. The top bar gets bend and some of the stand as well. Yeah, that one is probably broken for good. Guess thats always the danger of dealing with this type of crowd. After the bands are done we pack our gear and that is the official end of Fest. I have to say, I liked the after party itself better last year, although the photo booth went really smooth again, just like Friday. Robert and I part with Kendra, all willing to do this again next year. Robert and I get some late night food / breakfast at an Ihop at like 5 am. Thats the end.

For the photos of the night visit the gallery.
For the photo booth photos visit www.festphotobooth.com